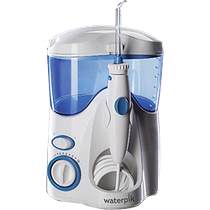 The Waterpik is recommended for daily use by those patients who have be previously diagnosed with periodontal disease and have gingival pockets greater than 3mm when measured by periodontal probing by a hygienist or a dentist. I recommend it’s use not as a replacement for either flossing or a proxabrushing, but as an adjunct.

The Waterpik should help flush out their gingival crevices. especially those that are deeper than 3mm.   Bacteria can be present floating  in the crevicular fluid.. This ‘seeded’ bacteria (in solution) is thought to be particularly harmful and prone to cause periodontal inflammation

The therapeutic action of the water pik is probably due to the‘Venturi’ effect.  When is high speed jet of water traverses the interproximal space, it tends to create a vacuum that ‘sucks out the stagnant crevicular fluid and allows for fluid exchange.

Patients who properly use their water piks on a daily basis may have still have pockets greater than three mm but when probed with a periodontal probe tend not to bleed. Since bleeding on probing is considered to be an indication of periodontal inflammation, lack of bleeding probably indicates the absence of inflammation. and like wise would indicate an absence of active periodontal disease.